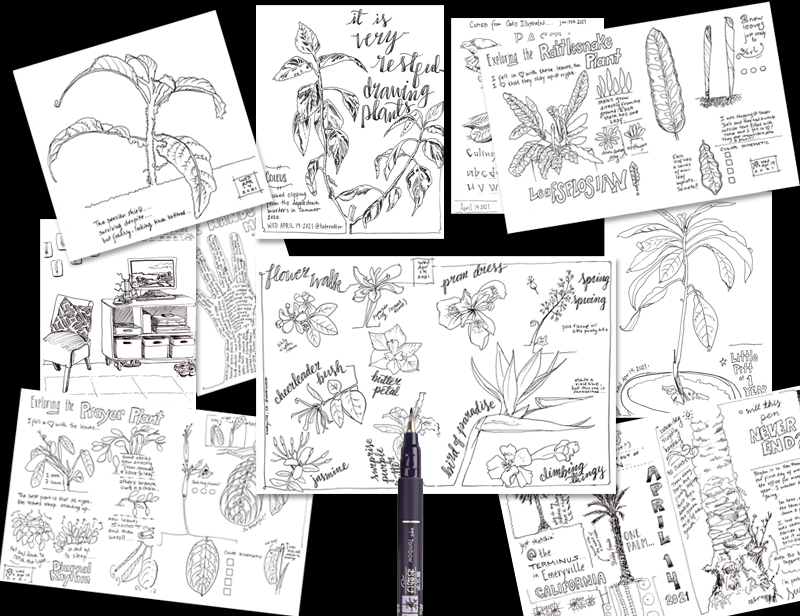 It’s Spring and the crushing deadlines of teaching college in a pandemic are crushing my soul. One way I renew my energy? Nature sketching. By falling in love with the details of nature, I find solace, focus, and rejuvenation.

On a Sunny Wednesday in April, I needed a break. The plan was to do a short beauty-sketchwalk.

A beauty-sketchwalk is when I don’t do a full nature observation, I just relish capturing the beauty of what I see. It’s a prep for doing a deeper dive later.

So I set out in a walk around the block, sketchbook and favorite pen in hand, glancing and gazing as I strode along. Flowers were bursting along the way…this would be a flower-capture session!

First stop: a low-growing plant with delicate pink and cream panicle flowers that drew me in. A quick capture sketch and then on to the next.

I was doing the 3rd flower capture when I lost the cap to my pen. This was bad. Retracing the steps yielded nothing. So I thought…”Huh. I might as well just try to use up the whole pen before it dries out.” Thus was born the run-the-pen-dry experiment.

It’s surprising what happens when you change a goal. Instead of focusing on the observation and sketching process (my sweet spot) or the visual look of the output (my trap!), I was simply working to capture as much as possible and use as much ink as I could, racing against when the pen would dry out.

I drew 10 flowers in the beauty sketch-walk. Then moved on to the houseplants, did a portrait of Little Pitt (long on the list!) and the Persian Shield (not thriving.) Next came explorations of two delightful prayer plants (those leaves!) followed by a bizarre stream-of-consciousness spread of the corner public space….a mesmerizing examination of the leaves of a colorful Coleus…a hand portrait of “these hands have”…a sketch of a corner of the living room (known as the Coffee Level) and a copy of the back of an issue of Cooks Illustrated.

Near the end, the pen was definitely sputtering. I was fully rejuvenated and eager to get back to work on deadline-driven tasks.

I did some serious depletion of ink, tho! And reconnected with the joy of the eye+hand+draw connection…without overthinking, without judging, without caring about anything other than the pen-miles and the flow of the ink on the page.

This unexpected experiment opened up new possibilities…what would it be like to start a sketch-day, crack open a new pen, throw away the cap and just sketch until the pen runs out? I think it would be ahhhmazing. Now that I’ve had a taste of it by accident, I’d like to try it by intention.

I learned to hold on to the pen cap! 😉 But more importantly, how the goal can impact the process and the result. I also learned that it takes a lot of drawing to run a pen dry!

I was surprised at the ebb and flow of inspiration. Some of the time, I was able to fall into the subject and get into flow. Other times I felt like I was forcing the process. Both sensations were interesting, and the forced continuation opened up new sessions of flow. The lesson was keep going and keep (the pen) moving.

Next time…I’m totally going to plan a Run-The-Pen-Dry sketching day!